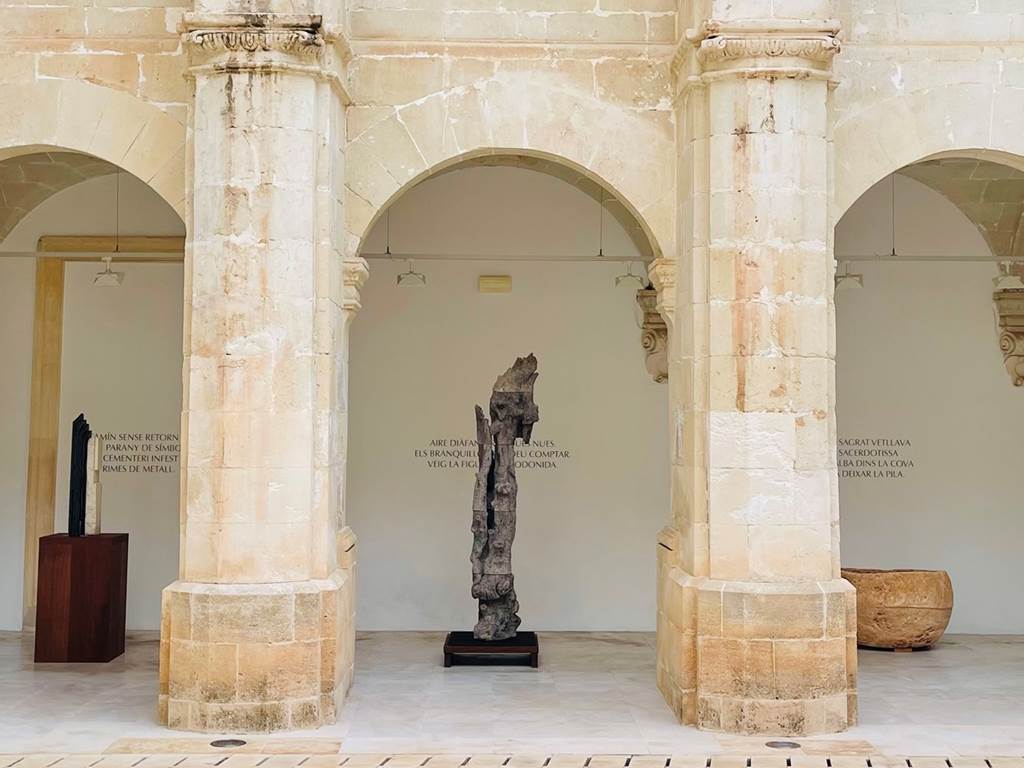 The cloister of the Museum of Menorca, built in around the year 1700, and one of the best examples of Menorcan religious architecture, is home to a group of sculptures that allow visitors to take a stroll through contemporary Balearic artistic creation by way of a contemplative exercise, in honour of the primordial purpose of all cloisters: that of contemplation and reflection. Sculptures by Mariam Blanco, Joan Costa, Laetitia Lara, Ana Llorens, Andreu Maimó and Jaume Ribalaiga, distributed along the cloister’s northern and western walls, adhere to the nature and symbolic sense of shape. The verticality of several of these pieces, totemic, filiform or monolithic, allow for a connection between the organic and elevation, whether physical or spiritual. The walk concludes with a piece that, due to its horizontality and the concept by which it is inspired, invites the spectator to reflect on death. It is the final note of a walk that begins with a Talaiotic basin that has been dispossessed of its original purpose and use in inheriting the rank of sculpture. In such, the sculpture walk sets off, as does a visit through the halls of the Museum itself, with the Talayotic culture, as the origin of Menorcan history.

Throughout the walk, we will also come across a selection of verses by Josefina Salord that establish a dialogue between poetry and sculpture. This walk, however, has its origins in more recent times, near the end of the 18th century, at the hand of Joan Ramis, the founding author of modern Menorcan literature, in addition to other authors who reach our own times.

The verse by Anna Maria Ticoulat, in reference to the sculpture by Laetitia Lara, transports us to the image of Daphne, the tree-woman, and with her the principles that inspire this sculpture walk. Life, death, nature, woman and the Mediterranean spirit turned into material, shape, texture, light, movement, meaning and symbol.

Originally intended to be a receptacle, its hemispherical shape can be associated with, among other concepts, the origin and abundance of the cosmos. As the starting point of our sculpture walk, its meaning can be considered threefold: as an object stripped of its original purpose to offer a new meaning, as a representation of the culture that initiates a visit of the Museum of Menorca’s permanent exhibition halls, and due to the seminal nature inherent to all artistic creations.

The work of Andreu Maimó is endowed with substantial personality, far from any trends, schools or “isms”. A self-taught and highly gifted draughtsman, his trajectory is tightly bound to trees as his artistic and conceptual focal point, specifically the fig tree. It was in 1974 when it first appeared in his pictorial productions, gaining notable prominence twenty years later and being transferred to his ceramic sculptures. His work shows clear associations with his natural environment, where the fig tree plays a leading role. His ceramic trunks, abundant in bumps, unevenness, knots and roughness speak of nature’s unyielding, of the passage of time and the mark it leaves behind. His symbolism is captivated by the tree as a bond between heaven and earth, and by the fig as a sacred tree of the Greeks (Dionysus) and the Romans (Bacchus), as well as the Buddhists (Buddha attained enlightenment under a type of fig tree).

The work of Mariam Blanco shows notable influence from minimalism and makes use of stone as its habitual medium, while striving for opposing expressive qualities in colour and texture, as can be observed in Estela negra (black stele). The strength of the black granite contrasts with the delicate marès limestone, while the granite’s brilliance contrasts the luminescent nature of the white limestone. Despite its verticality, this piece does not in fact represent the elevation we observe in the other pieces. In this case, it has a commemorative and funerary nature that is accompanied by three enigmatic parallel lines engraved in the marès.

A potter with extensive family tradition, Jaume Ribalaiga makes pottery an art form, like Joan Miró or Pablo Picasso did before him. In 1963 he took part in the founding of Grup Menorca, a group of artists who developed Menorcan avant-garde. This monolith marks the beginning of his ceramic sculptures, after many successful years creating stoneware jewellery.

Through use of a refined technique, he incorporated his own plastic and chromatic values into informalism and allowed the material to take prominence. Its association with nature is inevitable, and especially with the rocks of Menorca’s northern coast, where a weave of veins paint a reticular structure. Whilst the monolith is also a monument, this monumental nature is also a commemoration of earth and stone.

In Laetitia Lara’s professional trajectory, stone, and particularly limestone, has served both as the means and the end. On one hand, much of her production utilises stone as the medium, in which she finds the most adequate expressive properties and capacities for her language, and on the other, stone is a symbol of unity and strength that reinforces her discourse regarding myths and archetypes. Masculine pieces are symbolised by a guard or a monk, totemic and static; feminine pieces by Venus, who with notable dynamism occupy a prominent position, like this Artidi. It was in 1985 when she created her first earthenware pieces, already then voluptuous and intimist. Her representation has always showed ties with Palaeolithic goddesses, Mother Earth and fertility. In such, this sculptor reproduces the canons of ancient beauty (unshaped faces and exaggerated breasts and hips), which she uses to bestow this piece with movement and lineal purity as a whole.

The artistic path of Joan Costa has direct links to nature, and particularly the world of aquatic plant life. The Mediterranean nature and classicism that have impregnated the history of Balearic Island art is reformulated with contributions from minimalism, as elements that provide his work with remarkable serenity and poetry. With his first mobile sculptures of the mid-1990s, made from galvanised mesh, stainless steel and brass, he set out on a path towards movement and undulation that would transfer to paper and iron, until achieving significant formal and aesthetic purity. In his work we find permanent assertion for respect for our natural environment, especially with regard to Neptune grass, as a plant with extreme ecological value in a constant state of risk.

In the piece Alga (seaweed), iron becomes light and fragile, and the sculptor seems to bring it to life through perpetual movement.

Ana Llorens belongs to youngest generation of this sculpture walk. The multidisciplinary nature of her work includes performance, painting, installations, video and sculpture. Her artistic research reflects upon concepts that involve the artist’s identity, feminism and the vulnerability of various collectives.

No puc respirar (I can’t breathe), responds to a highly specific historical moment that intertwines two simultaneous crises: the death of George Floyd, a black American who was suffocated to death by the Minneapolis police; and the respiratory difficulties of those stricken by the Covid-19 virus and the use of facemasks during the pandemic that devastated the planet in 2020. The marble tombstone, in a provisional position, symbolises the fragility of human beings and their inability to overcome violence and prejudice.