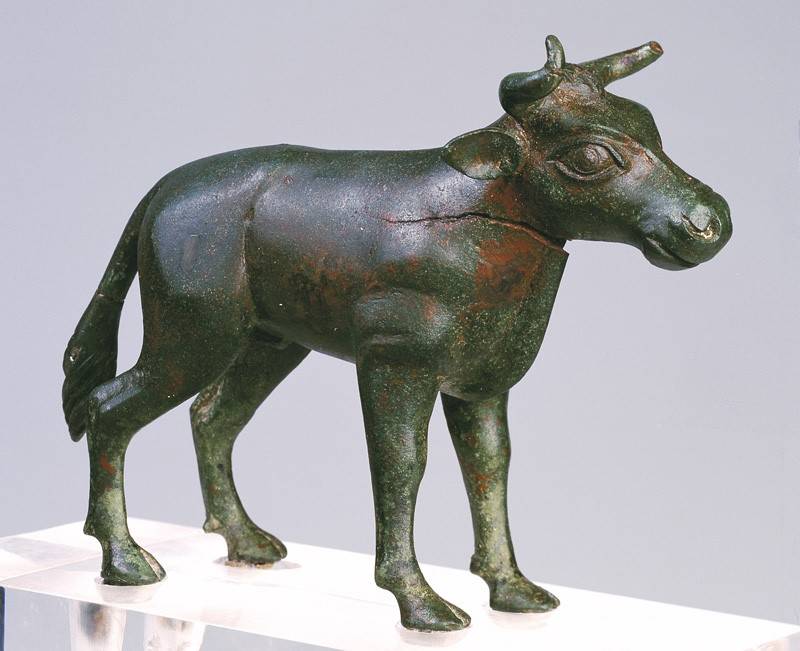 Small ternary bronze sculpture, cast using the lost-wax process. Although it is small in size, it is very finely crafted. The sculpture's surface shows a greenish patina that gives the object a high quality appearance. The ox is standing, with its face high and looking forwards. It is standing still although it shows certain tension and seems ready to move, as its muscles appear tense. The front legs are stretched and parallel, whilst the rear legs are slightly bent and the left leg about to start walking.

The small sculpture is complete, except for the tip of the left horn. Its state of conservation is quite good, despite the existing crack on its left side, that runs from the neck almost to the rear left leg. The cause of the crack remains unclear, and could be the result of a fault in the wax mould that once the sculpture was cast had to be repaired and the holes covered from where the molten metal was poured into the mould, or it may simply be a melting defect.

The modelling of this small ox was particularly accurate around the face and head areas, where details such as the eye contour, mouth and fringe were treated with particular thoroughness. These parts were engraved using cold chisels. The mixed technique used, that is, the melting of metals and engraving, make for a combination for extreme realism.

This small sculpture was designed to be placed and fixed on a flat surface, as shown by two joints, one under each leg, although it was found at the foot of a small stone altar located near the taula. This stone altar seemed to be already occupied by another small bronze sculpture that had been pulled off at an undetermined moment and whose three legs where left fixed on the stone.

The ox of Torralba appears to prove that this animal was worshipped in the taula sanctuaries. This fact has other related findings in different tombs and burial areas of the same period, where horns and elements related to oxen were found. This shows the religious, and also economic, relevance that this animal had around the end of Menorcan prehistory.