MOSAIC OF THE LA BASILICA OF THE ILLA DEL REI 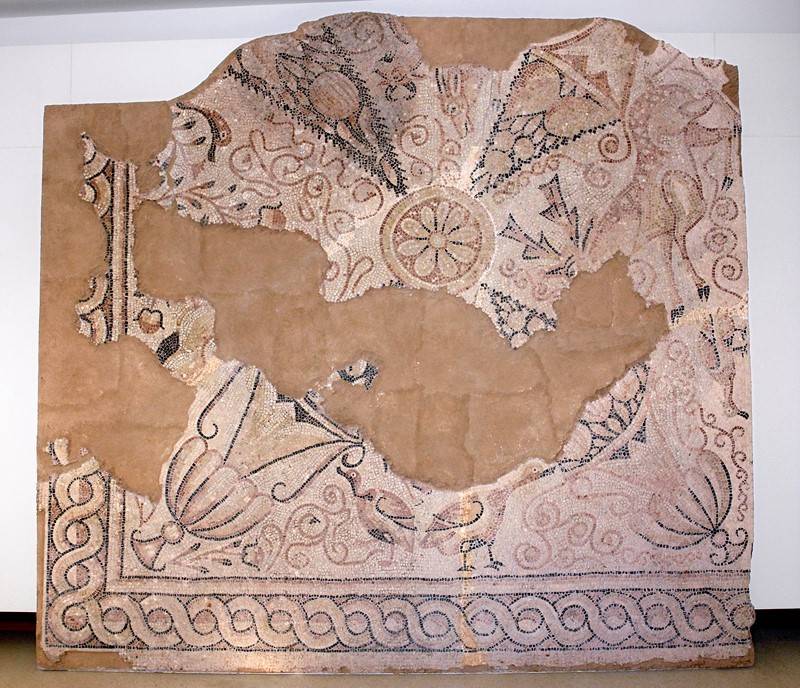 Dimensions: When it was discovered (1888): 16.50 m long (including the spaces that separated the different areas of the basilica)Dimensions of the three different mosaic compositions: Looking west, the one in the first area 5.20 x 3.30 m; the central mosaic 4 x 4 m; the mosaic corresponding to the apse 5.70 x 3 m;

Date: Second half of the 6th century CE

The mosaic was found in the east area of the Illa del Rei island [Bloody Island] in January 1888. On the very same day, the 27th of January, the local newspapers published the finding. A Corinthian capital and the remains of several roof tiles completed the discovery.

Hipólito Llorente, governor of Menorca at the time, made two drawings, one of them in watercolour, which he gave to the Real Academia de la Historia of Madrid. The newsletter of this institution published the drawings together with a short article in its 1888 edition. This short article compared the mosaic to the floor of the Hammam Lif synagogue, near Cartago, and it was suggested to have belonged to a building with similar uses.

Once discovered it remained in situ and, therefore, suffered notable deterioration. Therefore, and despite continuous claims, it was only in 1950 that it was decided to remove the remains and transfer them to the then recently inaugurated  Museo Provincial de Bellas Artes de Mahón.

Since then, the mosaic fragments remain decontextualised, outside the building where it was orignally located. The site excavations started when the mosaic had already been removed, which complicated the interpretation of the strata.    Maria Lluïsa Sera directed and published the excavation's outcome and concluded that it belonged to a basilica and a group of annexed spaces (1966). Other mosaic fragments were discovered that belonged to rooms between the pillars that separated the central nave from the northern one (some of which had already been drawn in 1888) and from this very nave. Recently (2008), revised works have been carried out to obtain updated data on the building containing the mosaic, a three-nave Byzantine basilica dated of the 6th century.

Any study of this mosaic, which corresponds to the basilica's central nave floor, must begin with the drawings made in 1888, since they offer a detailed image of the composition set. It is made up of three different mosaic floors that were removed separately due to their size and because they were laid out on slightly different levels, according to the land orography and the uses given to each space.

The decoration shown in this western area is framed by a border that depicts a line of alternately inverted wedges. Its checker board layout shows pairs of tangential triangles decorated with rope-shaped leaves and perhaps some duck figures, of which only one looking eastwards is still visible. The central mosaic rug corresponds to the choir area and is framed by a braided line of two twisted ropes with gaps. It depicts a centralised composition of four craters located in each angle from which many plants and fruits converge in a circled flower pattern. This is a clear invocation to wealth and abundance. In the spaces between craters animal figures appear either alone or facing each other (deer, ox, duck, hare) among plant motifs.

Finally, the mosaic of the apse area includes three different sections. The lower part, with two lions facing a palm-like plant; the altar space framed by a border that shows gemstones inside of which there are four points that we identify with the small columns formerly supporting the altar, in addition to two relic chests, slightly displaced southwards. Behind the altar and surrounding it, we again find the depiction of fauna, this time marine fauna, in a random composition.

From the comparative analysis of the compositions as well as of the singularities of the depicted representations, the mosaic has a number of parallel examples around the Mediterranean area that were used to decorate Christian buildings, as well as synagogues during the Justinian period. In particular, however, the closest ones are located in the area conquered by Justinian in the 6th century, that is, the Western Mediterranean, from Ravenna, capital city of this Byzantine region, some Adriatic centres (Canosa), the islands (Sardinia, Corsica, Menorca and Mallorca) and the north of Africa. This constructive impulse and the dissemination of some common models, some recovering late-ancient compositions, with other newer ones, are the result of a programme implemented by Justinian so as to reorganise or, in some cases, to reconcile different churches and faiths after Vandal or Ostrogoth rule during the Arrian period in these regions.