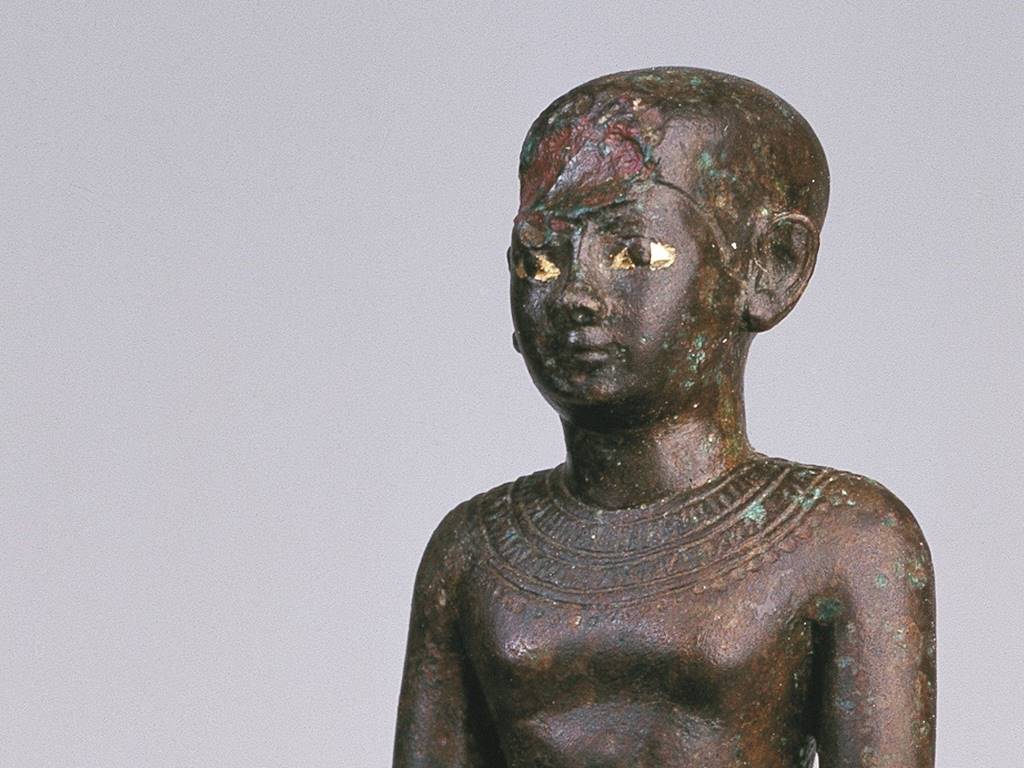 Date: Made in the 7th -4th Centuries BCE

This small bronze sculpture represents the Egyptian god Imhotep was found in 1974 during the excavations led by Guillem Rosselló Bordoy at the taula enclosure of the Torre d'en Galmés settlement.

Who was Imhotep? We could say that he was a real person that underwent a gradual apotheosis process. He is the first person we know of that did not belong to royalty. During his lifetime, he was primarily popular as the architect of the first pyramid, that of the pharaoh of the Ancient Egyptian Empire Djoser. It was only in the Late Empire period that his facet as a doctor was acknowledged, making him the patron saint of this field.

Alongside the bronze sculpture, a small group of related objects were found. They consisted of two small bronze lancets, which could be considered surgical instruments, and a quadrangular stone, that we could relate to the pouring of liquids during rituals. This set of objects was found in situ, although slightly displaced, within the settlement sanctuary. It seems to be quite certain that they were in use during the 3rd and 2nd centuries BCE.

The small sculpture is a particular example of a votive sculpture typical of the Late period of Ancient Egypt, of which we have samples created mainly during the 7th to 6th centuries BCE (Saite period). There are many examples found in different museums around the world that are virtually identical, or at least very similar, such as the British Museum, the Louvre or the Boston Museum of Fine Arts. However, in all these cases, the sculptures are either from collections whose origins are unknown or they all come from Egypt, more specifically from Saqqara, where they have been found in larger quantities, as this is where its beliefs were first developed.

The small sculpture is clearly made following the Egyptian style, as can be deduced from observation and comparison with the hundreds of examples we have. It is a high quality sculpture, very well conserved, that shows the typical iconography of this kind of sculpture. Imhotep is seen here as a seated adult, dressed with a long pleated skirt typical of an Egyptian priest, wearing a large usekh necklace and a cap on his head that relates him directly to his mythical father: the god Ptah. On his lap, there is an unrolled papyrus with a hieroglyphic inscription that identifies him as “Imhotep, son of Ptah, born of Khereduankh”. A small detail that further confirms the quality of this small sculpture are two small sheets of gold foil set over his eyes. Under his feet, we can see the remains of an approximately 3-cm base, which leads us to believe that the sculpture may originally have been found on a sort of plinth, currently lost.

The discovery of this small sculpture in Menorca is exceptional in many senses. Firstly, it is interesting to find an Egyptian sculpture out of its place of origin, although this would be relatively common if we bear in mind the frequent trade commerce carried out at that time in the Mediterranean Sea. What really strikes us is that it is the sole example currently documented of an Imhotep sculpture found out of Egypt in a very particular archaeological context. Therefore the explanation as a mere trade exchange of a luxury object, as it had been traditionally construed, cannot be as simple as this. These facts allow us to believe that this case is more complex than it initially seemed, as in our opinion, the person responsible for the group of objects knew perfectly well who Imhotep was as well as the rituals related to his worship, already developed in Egypt.