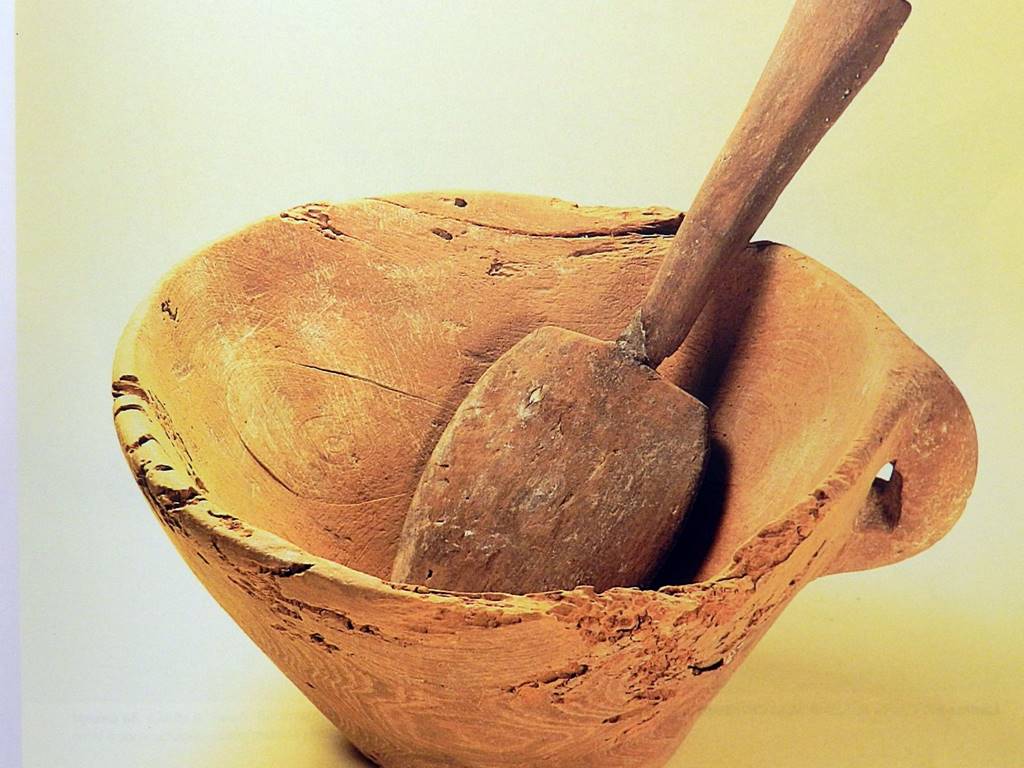 Definition:Group of artefacts that were deposited together in a hidden hole dug out from the floor of Chamber 5 of the Cova des Càrritx and then covered by a slab made of compacted clay from the cave. It is thought that the purpose was to preserve the beliefs of this small family group that was buried inside the Cova des Càrritx cave and was related to this group of artefacts. Beliefs and rituals related to death in which the individual's hair gained special importance.

Tubes filled with hair:These are tubular containers made from cattle horn or wood, with a somewhat truncated cone shape, filled with hair. These containers had a base that was fitted in the tube using a varying number of clinches of different thickness made of wooden sticks or rivets. The container was sealed on its upper part using a lid with a ridge that allowed to fitting into the tube. These lids of a circular shape were usually made of flat animal bones or wood and appear decorated with concentric circles. This decoration was drawn with a compass or a similar metallic instrument. The final fastening was achieved with the aid of some strings that were threaded through the perforations made on opposite sides of the lids' surface and the upper part of the tubes, where two vertical perforations appeared.

The tubes contained locks of cut hair up to 13 cm long. The analysis of these hair locks shows that they were dyed in a reddish colour made using plant material, such as from the European nettle tree, common knotgrass, Spanish broom, black nightshade and in particular, the "dog rose", that were found and identified in Room 1 of the cave. The hair locks had been cut just after death. The hair was left near the dead body for the symbolic value that they provided as a distinctive element of each individual.

Given the wear of the tubes' lids it is thought that they were reused more than once.

The collection of Room 5 was discovered by chance by Pere Arnau and Josep Márquez, speleologists and discoverers of the cave, when they first visited it in February 1995. This group of artefacts is considered to be one of the most important findings of the Cova des Càrritx for two reasons: on the one hand, because the objects were found sealed and intact and, on the other, due to the nature of most of the artefacts found inside.

Room 5 is a small space of difficult access and displaced location with respect to the main layout of the cave. Inside this chamber only this group of artefacts was found; therefore researchers think that this space was never inhabited, but that it was only used to hide this group of artefacts inside an oval-shaped hole dug from clay soil.

The recovered artefacts inside Room 5 speak of complex ritual practices involving individuals' hair buried inside Room 1. The relevance of these practices is primarily found in the complex creation of wooden objects used, and the discovery of similar artefacts in many burial contexts around Menorca between 1050 to 800 BCE (natural caves, navetas and hypogeums) that show common rituals.

Through the artefacts recovered in the pit it appears that the treatment of an individual's hair (either dyed or anointed and combed) was performed on the ground of Room 1. Subsequently, some locks of hair were cut and placed inside ceramic beakers and finally placed inside the wooden or horn-made cylindrical containers. Once these arrangements were completed, the containers were left in Room 1 near the buried body. The fact of having found fewer tubes than the number of individuals buried in this period between 1100-800 BCE, and the fact that we usually relate one tube to one individual, made researchers consider the hypothesis that these rituals would only be carried out for certain dead individuals.

These objects were hidden around the 8th century BCE, at a time of transformation of social structures and of Balearic social crisis. This fact resulted in the formation of new communities established around talayots. Indeed, in this changing context, the family group related to the Càrritx cave decided to ensure the memory of their burial space by moving the most relevant ritual objects to a hidden place, buried below the earth. The chosen materials were not the metal trousseau, but their predecessors' hair and the tools related to their performance of rituals. Therefore, these artefacts appear to have been hidden for reasons of an ideological nature. So all these elements necessary to carry out the ritual related to hair were gathered and hidden in hopes that they could continue with their rituals in the future and re-establish the former social order.

Description of the most remarkable artefacts of the collection:

Origin:Cova des Càrritx, natural cave of karstic origin located in the ravine of Algendar, 30 cm above the bottom. Material:  Group made up of different artefacts, some made of wood, bone or animal horn with others made of bronze. Culture:   Talayotic Date: 1100-800 BCE Under custody at: The artefacts are found under the custody of and stored in the Museu Municipal de Ciutadella, Bastió de sa Font. 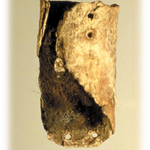 The thorough execution is outstanding and has no parallel in other contemporary European regions. Therefore, the difficulty lies in the fact that in this case, the tree's medulla crosses the walls, making carving and subsequent drying more challenging. This type of carving that involves the use of a central area of the trunk, is related to the small size of the box tree, that must have required craftsmen to develop a more accurate carving and transformation technique.

The hollowing of the interior part of the beaker was done using knives and metallic chisels. The surface was smoothed by polishing it with rough stones.

The beaker also presents varying degrees of signs of wear, such as small slots and areas notably smooth and shiny as a consequence of continuous handling.

The beaker was discovered empty, leading researchers to believe that it may have contained some kind of substance or liquid that left no trace. However, the use of this object becomes clearer when contemplated with a heather wood spatula that appeared inside the beaker made using sharpened bronze blades and subsequently polished using an eroding material.

These two elements may have been used together to prepare the substances needed to dye or anoint the deceased individual's hair before cutting and introducing the hair locks into the horn or wooden tubes that we find in this collection.

The comb (reproduction): It is one of the most iconic artefacts of the collection. The object is made of boxwood and its shapes reminds us of a bat with spread wings. This morphology makes it a truly singular object, in the context both of the Balearic Islands and Europe.

The comb, which is 74 mm high x 79 mm wide, is presented as one of the most remarkable objects ever documented in European prehistory. With regards to its creation, bronze blades were used, and the spikes were cut using the erosion power of a moistened thread covered with sand by means of the friction from continuous and accurate movement.

Concerning its use, it could be related, together with the spatulas and wooden containers, to the handling and arrangement of hair during the burial ceremonies carried out inside Room 1 of the cave. As a symbolic contribution, it must be said that bats are often related to the underworld and darkness. 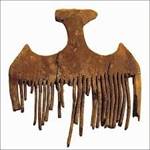 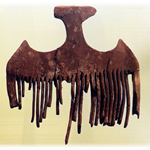